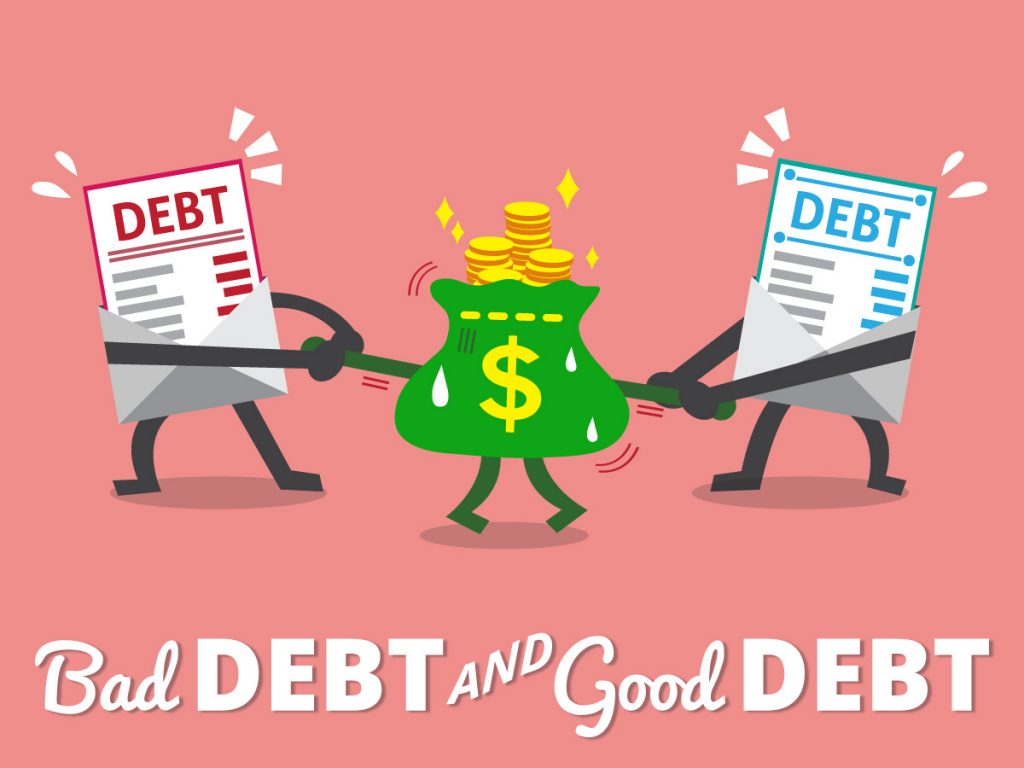 The equivalent of what the word “debt” means in German is a rather negative word because that is indeed how they view debt. It’s perhaps worked out very well for them because the Germans’ general fear of debt is complemented by a production-based economy.

I mean there’s probably a German-made vehicle in at least one garage in perhaps every neighbourhood around the world, whether it’s in the luxury vehicles bracket or if it’s servicing the entry-level or affordable car market. The four-letter word is not all bad however, especially if you’ve not gone German on the very concept of spending now and paying later.

Depending on how you make use of the concept of paying later for something you can have access to immediately, debt can be either bad or good.

We’ll start with bad debt because frankly when most people speak of debt, this is what they’re referring to, bad debt. Bad debt is when you’ve made use of a credit facility for which the repayments you struggle to make good on. Any debt you take out naturally has interest added to it, which you must then pay back with your repayments and often the need for taking out debt in itself is an indication that you can’t quite afford to make the repayments.

It’s a different story if you’re just short of a little cash at the moment and you’re guaranteed to get some when you next get paid your salary, etc., and you therefore just need to borrow a little to tide you over. If you’re struggling to bring your credit facility or overdraft back down to zero every month or so, then this is a clear sign that the type of debt you hold is bad debt.

Bad debt can also take many other different forms however, as is often seen in the automotive industry. If you take out credit to finance a new car for example, which you’ll have to pay-off over six years, the value that that car gives you over that six-year period should justify the repayment time period and the total amount you’ll ultimately be paying for that vehicle. If that’s not the case then you perhaps need to go for a cheaper vehicle so as to mitigate the impact of the debt.

While the rather rare 500 Euro note was probably introduced and circulated to accommodate our German friends’ appetite for buying some of their own BMWs cash, debt can also be good sometimes, depending on how you use it. If you have fifty thousand pounds in your bank account for example, and you want to buy a lorry to operate your delivery business, spending the entire fifty thousand quid on the spot may rob you of the opportunity to perhaps make better use of around 90% of it for everyday business operations such as fuel, etc.

An example of using good debt would be to get financed for that lorry and only deal with monthly/weekly repayments for a little while, while at the same time you make good use of the cash you have in your hands. You can always pay the whole thing off early in any case, but why rush it if you really don’t have to?